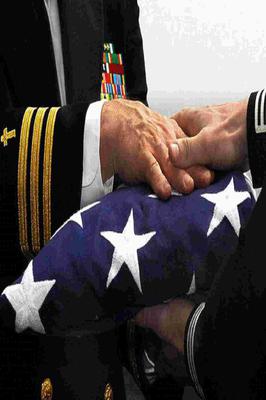 I often think I see his smiling face;
As he bade his last good-bye;
And he left his home forever;
In a distant land to die.

We mourn our brave soldier,
who lost his life;
Leaving father and mother,
child and wife;
Officers and privates
on the battlefield fall,
God makes no difference; death levels all.

He heard the call of his country;
And answered it brave and true;
"I'll be a man to do or die;
I'm going to help them through."
The Great Commander has written his name;
On the roll of him who gave;
His Only Begotten Son;
And died that we might live.

We're so lonely since you've gone.
They are not dead but sleepeth;
Just when your life was brightest;
Just when yours were best;
You were called from this world of sorrow;
To a home of eternal rest.

They saw with a brighter vision;
The Empire through the years;
They went with songs and laughter.
We leave them there, with tears.

He is not dead who gave his life;
To make the world a better place;
The memory of noble deeds;
The passing years cannot efface.

Soldier, rest, thy warfare o'er;
Sleep the sleep that knows no breaking;
Dream of battlefields no more;
Days of danger, nights of waking.

Tranquil you lie;
Your nightly virtue proved;
Your memory hallowed;
In the land you loved.

Honored among the nation's heroes
lies our loved one;
Beneath a simple wooden cross,
his crown;
And we who knew and loved him here,
can say:
A simple love, a simple trust,
a simple duty done.
He died as brave men have a chance
do die;
Fighting for God, and right, and liberty.

(Ten) sad and lonely days have passed;
Since our great sorrow fell;
The shock that we received that day;
We still remember well.
How his life was shed we know not;
What his last word, look or thought;
Only that he did his duty-
Died as he bravely fought.

I shall remember while the night lives;
And in the darkness I shall not forget.
In life loved and honored;
In death remembered.

Greater love hath no man than this;
To lay down his life for his friends.
His kindness did not cease until;
That day of dawn (date of death)
Now memory lingers to us;
That are left to remember.

You went it seems but yesterday;
And now by crosses, row on row;
You linger where the poppies grow;
Not dead, but just away.

Somewhere in France, in a soldier's grave;
Lies our dear son, among the brave.
He never shunned his country's call;
But gladly gave his life, his all.
He died the helpless to defend;
A faithful soldier's noble end.

From One of Our Readers:

by Mac McGovern
The Old Salt (A Eulogy)

(A eulogy for male Sailors either retired or veteran. It is most specific to WWII and Korea. It can also be adapted for those women who served, and to other wars.)

The Old Salt was a special man
who came along in a time
when he was needed most.

A time that is now gone forever.
When men believed and sacrificed,
when hero’s walked the earth in mass.

When patriotism was not just a word
but,
by what men lived and judged
the worth of each,
a man who lived a life
most of us cannot comprehend.

An era now gone
as this warriors tour of duty ends
at this station, and begins anew
in the heavenly fleet.

Sail on Sailor into your unaccompanied tour,
we salute you.

What greater honor, when a man moves forward,
he leaves behind in each of us
the best of what he was.

A defender, protector, supporter, victor, a warrior,
the last of the breed from an era
when ships were made of wood
and men were made of steel.

The Old Salt has reported for duty
that takes him away from us for now.

Those of us who remain behind,
remember, and will continue to remember,
because he now resides forever in our hearts.

As I look up at night, I envision The Old Salt,
a beret draped just above the eye,
as he draws upon his pipe,
quietly he waits.
The guardian of heaven’s gate.